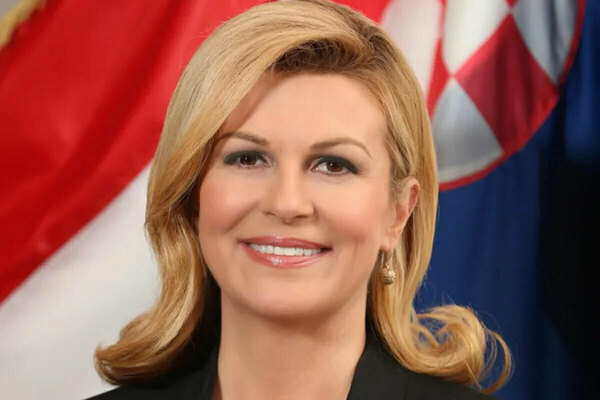 The Nanovic Institute for European Studies at the University of Notre Dame’s Keough School of Global Affairs will welcome Kolinda Grabar-Kitarović, the former president of the Republic of Croatia, to deliver the 2022 Nanovic Forum Lecture. The talk, titled “War in Ukraine, Peace in Europe? Geopolitics, Economics, and Security after Russia’s Invasion,” will take place at 5 p.m. Tuesday (Oct. 4) in the Hesburgh Center Auditorium and is free and open to all.

Grabar-Kitarović was elected president of the Republic of Croatia in January 2015, a position she held until February 2020. The fourth person to serve in this role since Croatia’s independence from Yugoslavia in 1991, she was also the first woman and, at 46, the youngest person to assume the presidency. Since the 1990s, Grabar-Kitarović has held a number of governmental and diplomatic posts, including to the EU and the U.S., and has received numerous national and international awards. In 2019, she was awarded a Lifetime Achievement award from the Fulbright Association, which recognized Grabar-Kitarović’s remarkable contributions as a leader, diplomat and public servant who “embodies the best of leadership in times of unrelenting global crises.”

Born in Rijeka, Croatia, in 1968, Grabar-Kitarović studied in New Mexico as a teenager, graduating from Los Alamos High School in 1986. After her return to Croatia, she enrolled at the University of Zagreb where she completed a bachelor’s degree in English and Spanish in 1993 and a master’s degree in international relations in 2000. She later received fellowships for graduate study in the U.S. From 2002 to 2003, Grabar-Kitarović was a predoctoral Fulbright scholar in international relations and security policy at George Washington University, and in 2009, she was a Lukśić Fellow at the JFK School of Government at Harvard University.

Her political career began in 1992 in Croatia’s Ministry of Science and Technology and then the Ministry of Foreign Affairs, where her roles included head of department for North America, positions in Croatia’s embassy in Canada and, from 2001 to 2003, minister counselor. In November 2003, Grabar-Kitarović was elected member of Parliament. As a government minister, she held the position of minister of European integration (2003-05) and minister of foreign affairs and European integration (2005-08), heading up the Croatian delegation that negotiated the republic’s Euro-Atlantic integration and accession to the European Union. In 2008, she became the ambassador of the Republic of Croatia to the U.S. and in 2011, she was appointed NATO assistant secretary-general for public diplomacy, making her the highest-ranking woman in NATO. In January 2015, Grabar-Kitarović was elected Croatia’s fourth president, representing the conservative Croatian Democratic Union. Since 2020, she has represented her nation on the International Olympic Committee.

“We are honored to welcome President Grabar-Kitarović to the Keough School and to Notre Dame,” said Scott Appleby, the Marilyn Keough Dean of the Keough School of Global Affairs. “Her groundbreaking career in government, diplomacy and public service has been distinguished by a commitment to global security and environmental stewardship, to the inclusion of the disadvantaged and voiceless in educational, economic and social opportunities, and to the quest for lasting peace in Europe. We welcome her as a friend and ally in these and other campaigns in support of human dignity.”

The Nanovic Forum deepens Notre Dame’s rich tradition of connections to Europe by bringing European leaders from a variety of academic, cultural and professional fields to campus to discuss issues of major importance in Europe. Established in 2011, the forum is sponsored by Robert and Elizabeth Nanovic.

“President Grabar-Kitarović’s impressive career is testament to the value of study and research abroad and of encounter and engagement with people and cultures beyond your own. She has turned these experiences into a life of public service and pursuit of the common good both in her home country of Croatia and on the international stage,” said Clemens Sedmak, director of the Nanovic Institute and professor of social ethics in the Keough School of Global Affairs. “In these ways, she is an inspiration to our students and her perspectives on Russian aggression and the war in Ukraine will be invaluable to the Notre Dame community. As always, we are very grateful to Bob and Liz Nanovic for the continued generosity that makes the Nanovic Forum possible.”

Past speakers in the Nanovic Forum have included European political leaders Horst Koehler, former president of Germany, and Hanna Suchocka, former prime minister of Poland, as well as other prominent leaders in education, law, government and the arts.

The Nanovic Institute for European Studies at the University of Notre Dame is an interdisciplinary home for students and faculty to explore the evolving ideas, cultures, beliefs, histories and institutions that shape Europe today. As part of the Keough School of Global Affairs, the institute is helping to advance integral human development through research, policy and practice.

A complete list of the Nanovic Forum series and a video archive of the past lectures are available on the Nanovic Institute website.

Originally published by Gráinne McEvoy at nanovic.nd.edu on Sept. 28.